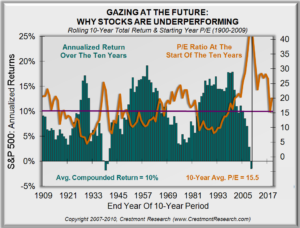 For a decade, Jeremy Siegel criticized the validity of Robert Shiller’s version of the cyclically adjusted price/earnings ratio (aka CAPE and P/E10) because of a supposed distortion of P/E10 due to the earnings plunge in 2008. In reality, for most of the past decade, the magnitude of above-trend profit margins more than offset the deep-yet-short 2008 chasm.

Reported earnings for the S&P 500 is highly variable, as reflected in the graph by the blue line. Therefore, a price/earnings ratio (P/E) based upon Reported EPS will often be distorted when Reported EPS is above or below its long-term trend (i.e., almost all years).

This chart provides three key insights about CAPE P/E10 and the benefits of normalizing EPS: (1) 2008 is no longer in current reports of P/E10, and 2008 caused minimal distortion in retrospect, (2) normalizing P/E is essential to avoid distortion from the Reported EPS cycle, and (3) EPS for the past 10 years includes only high profit margin conditions; the economy and S&P 500 may find the next few years will have below-average profit margins.

No comments to show.